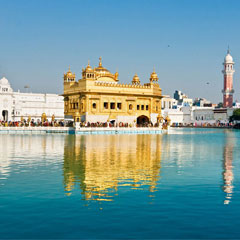 The Golden Temple, also known as Sri Harmandir Sahib or Darbar Sahib, is a Gurdwara located in the city of Amritsar, Punjab, India. It is the holiest Gurdwara and the most important pilgrimage site of Sikhism. The temple is built around a man-made pool that was completed by Guru Ram Das in 1577 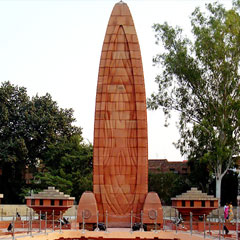 Jallianwala Bagh is a public garden in Amritsar, and houses a memorial of national importance, established in 1951 by the Government of India, to commemorate the massacre of peaceful celebrators including unarmed women and children by British occupying forces, on the occasion of the Punjabi New Year (Baisakhi) on 13 April 1919 in the Jallianwala Bagh Massacre. 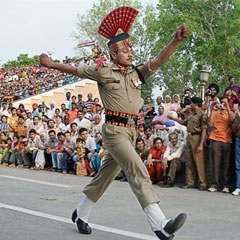 The lowering of the flags ceremony at the Wagah border is a daily military practice that the security forces of India and Pakistan have jointly followed since 1959. The drill is characterized by elaborate and rapid dancelike manoeuvres and raising legs as high as possible, which have been described as colourful. 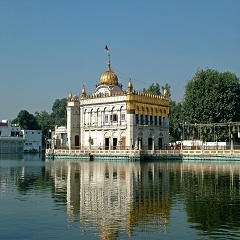 The Durgiana Temple, also known as Lakshmi Narayan Temple, Durga Tirath and Sitla Mandir, is a premier temple situated in the city of Amritsar, Punjab, India. Though a Hindu temple, its architecture is similar to the Golden Temple.